Today’s a day to bust out the champagne and celebrate, Seasonality 1.1 is finally ready and has been released. If you’ve been reading here, you already know the biggest new feature is international location support. This version supports 34,000 locations in 202 countries. I’m really glad to be able to support global users. I wanted to add international support for version 1.0, but time constraints kept me from doing it.

You’ve also seen pictures of the new satellite images, but one thing that I haven’t posted about is the new cylindrical wind direction graph. The idea for this graph came up one evening while Katrina and I were brainstorming about how to best display wind direction on a graph. Typical weather programs will show something like the first graph below with the direction along the y axis and time along the x axis. The problem is when you look at time periods like the end of the graph below. Really, the wind direction didn’t change much from Friday to Saturday, but the graph is bouncing all over the place. Sure, I could have just found a way to wrap the graph from top to bottom, but there are a lot of different cases that need to be handled, and not all of them can be handled in an elegant way.

So when we were talking about this problem, we figured that really the problem was that you can’t map the directions of a compass onto a mathematical plane, because 360 and 0 are the same direction so the graph would have to be “broken” somewhere. The solution we came up with was to map the data onto a cylinder. This way it’s easy to display 360 and 0 degrees as the same value. In the second graph below, you can see that between Friday and Saturday the wind direction was hovering around NNE, and the curve isn’t bouncing so much, making it easier to read. The rest of the graph is shown on the back of the cylinder, but I let people spin it around so they can see any part of the graph in more detail. Spinning the graph is a real trip, just seeing the other side of the graph roll around the bottom or top is pretty cool. 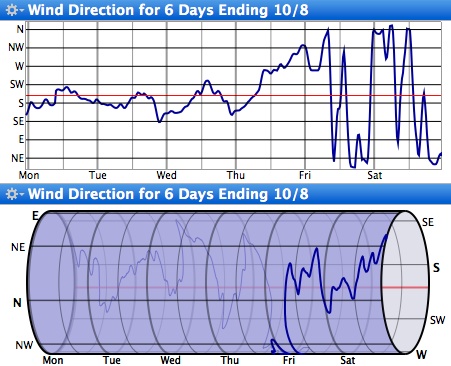 We’ll see if users end up loving or hating it. I ended up including both graphs in the final version just in case some people prefer the standard graph method.

So if you haven’t already, check out Seasonality 1.1. And even though there are a ton of new features in this version, this is just the beginning, I already got a set of features lined up for 1.2.