Well, it’s been awhile since I’ve posted anything here. Moving has turned out to be more intensive than I was expecting it to be. Things out here in Michigan are going pretty well for us. Our house still has random boxes scattered about, but at least we are at the point where we can be comfortable in some of the rooms. 🙂

I’ve starting the process of getting Gaucho Software off the ground. A lot of the work thus far has been more focused on system administration…setting up the web, database, DNS, and mail servers here and making sure everything is redundant and secure. I’ve found that RRDTool and Cacti together make a great tool to monitor all of the servers.

Since my office is in a finished bedroom of our basement, there are extra precautions that I have been taking in case the basement floods at some point. The sump pump is on a battery backup itself, so flooding should never be an issue, but I’m from the west, and just the possibility of this happening freaks me out. 🙂 The servers are all wired so there are no wires below the table they are on (except for one plug going from the UPS down to the electrical outlet). The UPS is new…our power has gone off a few times since we moved in so I thought it would be a good thing to have. I ended up getting a Belkin Enterprise Series 1100VA UPS and that has been working great so far. I’ve plugged three servers and all the network equipment into it, and it’s still running at only 25-30% load. This will give me about 45 minutes of backup battery for everything, which should be plenty.

One thing I was going to miss when moving away from Tucson are the monsoons we would get there in the summer time. Monsoons are very intense storms, and they were incredible to watch. Little did I know that Michigan has some pretty good storms as well. Early this morning there was an incredible show. I awoke to see our bedroom glowing and lighting up like there was a TV turned on in a corner. Lightning was flashing more frequent than once a second, and there was so much thunder that I couldn’t distinguish it separately…it was just a constant combined rumble. Anyway, I think the storms here will do for some good entertainment. The only drawback is that most of the lightning here stays up in the clouds, where the monsoons in Tucson would generate a ton of cloud to ground lightning. Below is a picture I took from our back yard an evening last August during a monsoon. 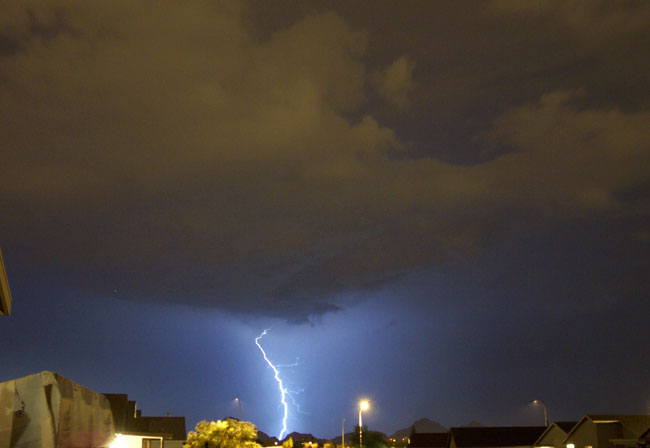